Meetings of the Board of Directors

Competencies of the Board of Directors

Taking into account the competencies of the General Assembly, the Board of Directors shall exercise the necessary powers to manage the SAS affairs and achieve its objectives. The BOD has granted the following powers to the Chairman of the Board and the Secretary-General, and the BOD in particular :

1. Call the General Assembly to convene and adopt its agenda

2. Form technical and executive committees from among the members of the Board, according to the need, and approve the rules of exercising its functions.

3. Approve the establishment of branches of the Saudi Aquaculture Society.

4. Approve the SAS annual budget for the next year.

5. Accept the members of SAS and approve the amount of the membership subscription and its amendments.

6. Approve the organizational structure of SAS and the human    resources plan and its amendments.

7. Appoint the Secretary General of the SAS and his Deputy on the basis of a recommendation of the Chairman of the BOD.

Competencies of the Chairman of  the BOD

Taking into account the competencies of the Board of Directors, the Chairman of the Board shall exercise the powers conferred upon him, particularly the following:

1. Represent the SAS before the Judiciary, and communicate with the official and non-official bodies inside and outside the Kingdom, on behalf of the SAS.

2. Adopt the SAS rules, regulations, organizational structure and plans and study them.

3. Approve the annual report and the final accounts of SAS of the past year.

4. Approve the convening of conferences, workshops, symposia  and training courses.

5. Approve the convening of the ordinary and extraordinary    meetings of the Board of Directors and the General Assembly.

6. Order disbursement and take other financial measures within the approved budget, and what is approved by the BOD.

7. Sign contracts, purchase orders according to the annual budget and financial regulations.

8. Sign agreements with third parties in order to serve the interests of the parties of the agreements.

9. Approve the policy of investing the SAS funds and its business activities.

The BOD of the  SAS 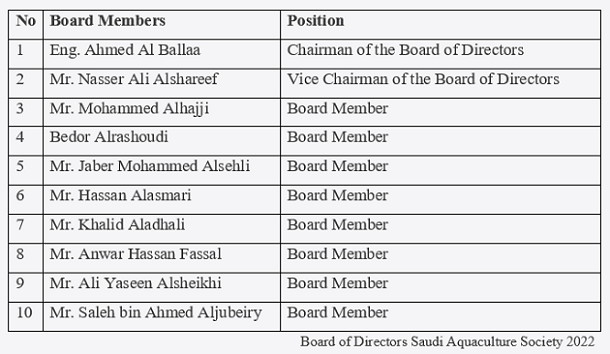